It’s autumn (fall to my American readers). Or is it? Our TV weather presenters say that autumn began on September 1st while my calendar tells me that the equinox, which I thought marked the start of autumn, falls on September 23rd this year; so, by that measure, we still have a couple of weeks of ‘official’ summer left.

Whichever is right, it’s certainly beginning to feel autumnal here with chilly mornings and evenings and noticeably shorter daylight hours. And, at home, we’re already marking the changing year by putting away most of our lighter, summer recipes and moving towards some of our more robust, wintery dishes. With wines to match, of course!

And where better to start my search for winter warmers than with Domaine Lupier’s El Terroir Garnacha (aka Grenache) from the under-rated Spanish region of Navarra (Wine Society, £17.50)? Its mix of intense red fruits with savoury, earthy flavours went perfectly with a chunky beef casserole. The intensity resulted from genuine old vines; I’ve mentioned before that the term has no official meaning, but here, some of the plantings date from 1903, making the vines well over 100 years old. The combination of a vast root system gained over this time and the naturally lower yields of ageing vines contributes a special depth of flavour to the wine.

The savoury, earthy flavours I noted arise mainly from a bit of bottle age; this wine was from the 2012 vintage, so 7 years old and having had an opportunity to mature and soften gently in bottle. Depending on your taste, some drinkers may already find it a little too mature, although I notice that the Wine Society suggests ‘now to 2023’ as a drinking window.

But we certainly enjoyed it and found it a perfect partner for our rich, flavoursome dish.

Most wine drinkers will be familiar with the name ‘Cava’ although, according to a recent survey, surprisingly few who bought it knew where it came from.  The correct answer is, of course, Catalonia, but this region in the north-east of Spain has far more than just the popular sparkling wine to offer.  I’m thinking, in particular, of the marvellous, intense red wines from the remote hills of Priorat.

Vines were first planted there by Carthusian monks in 12th century and wine has been made there ever since.  But, by the 1980s, Priorat’s vineyards were regularly being abandoned and the area was in danger of disappearing from the wine map.  It was so steep and the stony land so difficult to work that most of the traditional farmers found winemaking there uneconomic and the younger generation were lured towards jobs in the larger towns or the tourist resorts along the coast.

But a small group, led by Rene Barbier, were moving in the opposite direction.  They recognised the potential in the very old bush vines of Garnacha (Grenache) and Carinena (Carignan) and in the unusual llicorella soil, comprised of decomposed slate and quartz, which reflects the heat and aids the ripening of these late-maturing varieties.  Now, some 30 years later, the area has been re-vitalised and is producing some outstanding wines and, although the most prestigious ones sell for £200 or more, you can find some extremely attractive bottles for a lot less.

Take Arc de Pedra, available from Majestic, for example (£12.99).  At first sip, you find lovely sweet red fruits but, as it develops in the glass, it reveals raisins, prunes and subtle hints of vanilla and toasted almonds.  As you might expect, this is a big wine (14%) but it is well balanced.  The 2016 vintage that we opened was still showing quite prominent tannins, and although it went well enough with the strong flavours of a venison steak, in truth I probably opened it a couple of years too soon.  But, whether you drink it now or keep it, it would certainly benefit from decanting a couple of hours in advance, a comment that would apply equally to most of the deep, brooding reds from this – happily – rediscovered area.

There’s been lots of talk in the press here recently about the use of ‘Best Before’ or ‘Use by’ dates on food packaging and whether products are safe to eat after the date shown.  But how about wine?  Does it have a shelf life and, if it does, should it, too, have a recommended date on it?

I certainly don’t recall ever seeing such a date on a wine bottle but I generally advise that most white wines bought in supermarkets and cheaper bottles (say under £10) bought elsewhere are normally best within about a year of purchase; for red wines, you can probably extend this to two years.  The wine should still be perfectly safe even after this time, but wine matures and changes when it is in the bottle and so it may be past its best if left too long.

On the other hand, many (usually more expensive) wines take much longer than this to reach their peak and it would be a shame to open them too early.  Often, good wine merchants and websites will quote ‘drinking windows’ – the period during which they suggest a wine is likely to be at its best.  But these are only a guide; everyone’s taste is different and, unless you know the wine, deciding when you should open any particular bottle is, unfortunately, a bit of trial and error.

It is already 13 years old and has spent more than 2 years in oak barrels and a further 3 years at the winery (as required by the ‘Gran Reserva’ designation).  Yet, when I took it along to a tasting recently, a couple of my colleagues suggested that it needed still more time or, at least, should have been opened earlier in the evening to further soften the tannins.

I’m not convinced but, as I said before, everyone’s taste is different.  However, this is certainly a wine made to be drunk with food and its mellow, harmonious flavours would work well with so many of the rich dishes that are likely to be on the table over the festive season. 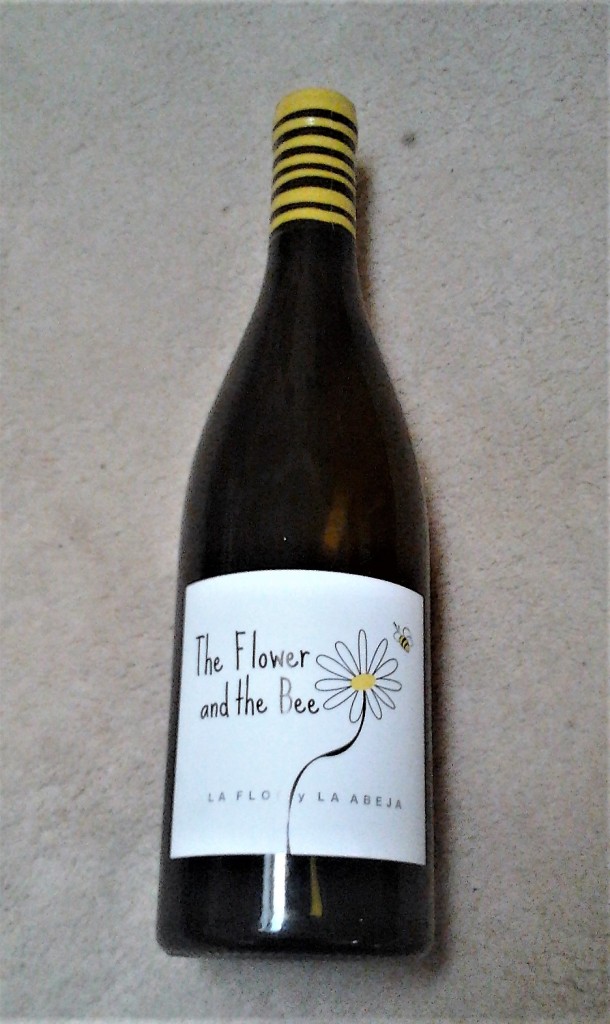 There are many good reasons for choosing a bottle of wine: something you’ve enjoyed before, a recommendation, a wine on special offer.  And then there are the impulse buys; I’m sure most of us have made those on occasions.  “I wonder what that wine’s like?” as we pick up a bottle that our eye is drawn to.  And the wine pictured above must be a prime candidate for that sort of purchase: unusually named ‘The Flower and the Bee’ and, with a label reflecting the name and even the foil over the cork in yellow and black ‘bee’ colours, the entire packaging of this wine says ‘look at me’.  And ‘buy me’, of course.

But the design is not the only reason for giving this wine a try: it’s on the Association of Wine Educators list of the top 100 wines under £25 and, having tasted it (bought from Grape and Grind in Bristol, £13.99), I can confirm that it fully deserves its place.

It’s a delicious unoaked dry white from the Ribeiro region in the north-west of Spain, made from the local Treixadura grape.  Quite peachy and fresh on the nose leading to a rich, full flavoured mouthful with lovely peach and ripe pear flavours and a good, long finish.  Although I’d be happy to drink it on its own, it’s also a great food wine: ideal for some white fish in a creamy sauce.

So, why ‘The Flower and the Bee’?  The wine comes from the Coto de Gomariz estate which is run organically (although not certified as such) and is moving towards biodynamic methods which involve nurturing the entire eco-system of the estate; the flowers and the bees are as important as the grapes to the producers and the naming and the label reflect that.

It’s a neat idea and certainly good marketing.  But, try the wine and I’m sure you’ll buy it again – regardless of the eye-catching packaging.

In my view, Spain is one of the most exciting wine countries in the world today.  Wherever you look, you’ll find dedicated and innovative winemakers working with an array of high quality local grapes.  And it’s not just in the traditional areas – Rioja and sherry – that you find delicious wines.   I recently ran a course at Bristol’s Stoke Lodge Centre concentrating on Spain’s ‘Hidden Corners’ – some of the lesser-known regions and grapes – where you can find wines that are not just very drinkable but, because they are not well-known, they are also great value.

The bottles I found for the group to taste provoked plenty of discussion – and some very diverse views; indeed, when I invited votes for favourite wines of the day, 11 of the 12 wines attracted at least 1 vote.  But, there were 2 clear winners:

San Antolin’s Rueda (Waitrose, £8.99) comes from the Upper Duero Valley in western Spain where vineyards are planted more than 600 metres (1800 feet) above sea level.  The altitude means cool nights, even in summer, which help to retain precious acidity in the Verdejo grapes from which this wine is made, while the heat of the day results in perfect ripening and a succulent, rich but refreshing white wine.  Fine for drinking on its own but even better with some fish in a creamy sauce that reflects the character of the wine beautifully.  I’ve enjoyed this Rueda over a number of years and it was an unsurprising winner. 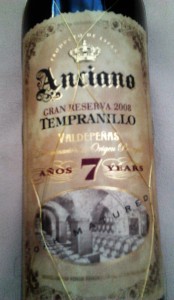 The close runner up, however, was, perhaps, a little less predictable.  Not, I hasten to add, due to any lack of quality in the wine, but, I might have expected that the soft, mellow, cooked fruit and spice flavours of an 8 year old red that had spent 2 of those years in old oak casks wouldn’t have had such wide appeal.  Happily, I was wrong and Anciano’s Tempranillo Gran Reserva 2008 landed in a well-deserved 2nd place.  Had this wine been from Rioja rather than from the deeply unfashionable Valdepeñas area south of Madrid, it would certainly have been at least double the £8.99 I paid for it in Waitrose.  A bargain, indeed!

And bargains are what you can expect if you explore ‘Hidden Corners’.  You just have to know where to look.