Looking back, I’m amazed at how rarely I’ve blogged about the world’s most widely planted wine grape: Cabernet Sauvignon.  Yes, I’ve mentioned it in passing when talking about other wines, but as for focussing on this most popular of red varieties – nothing!  Time to put that right as, at its best, it really is a grape not to be ignored.

‘Home’ for Cabernet Sauvignon is France’s most prestigious wine region, Bordeaux, where it has been grown for more than 200 years but it wasn’t until the latter part of the 20th century that growers beyond that region started to realise the potential of the grape.  As a result, world-wide plantings more than doubled between 1990 and 2010 and the variety is now found in virtually every major wine producing country, even in England where, historically, the climate hasn’t been warm enough to ripen this sun-loving variety.

The words ‘sun-loving’ mean thoughts turning to Australia, although it was actually quite a late starter there with the first Cabernet Sauvignon vines only imported in the 1960s and the first commercial bottling released in 1967.  But from that quiet beginning the variety has thrived, with especially good examples found in Coonawarra in South Australia and Margaret River in Western Australia (WA).

And it was a bottle from WA that we opened recently.  The Wine Society’s Exhibition Cabernet Sauvignon (£16.50) is made for the Society by one of WA’s oldest and most successful producers, Vasse Felix and is full of all those aromas and flavours Cabernet Sauvignon drinkers are familiar with and love: blackcurrant and cassis fruit, some herbiness and hints of black cherry and mint.  The 2019 vintage on the Wine Society’s current list is drinking well now and should continue at its peak for a couple of years yet but, as with most wines from this grape, it benefits from opening an hour or so in advance of drinking and teaming with red meat – grilled lamb would be perfect – or hard cheese.

Cabernet Sauvignon is certainly a grape not to be ignored – whether I blog about it or not!

Lebanon’s most famous red, Chateau Musar, is a Marmite* wine (see below if this means nothing to you) – people either love it or hate it.  My wife has quite enjoyed it in the past, but I’ve often been rather disappointed, finding it over-heavy and a little old-fashioned in style.  So, as a result, it’s not a wine we buy regularly.  But, when some very good friends messaged us recently to say they’d got a bottle and would we like to share it with them, it was an offer we couldn’t refuse and we accepted eagerly.  Then, when I learnt that the bottle in question was from the 2001 vintage, I began to get quite interested.  Because Musar is a wine that needs time to reach its peak, lots of time.  So, at almost 19 years old, I thought this might just be something special – and it was. 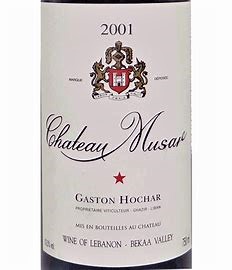 Decanted a couple of hours before serving – always a good idea with Musar – the wine showed definite signs of age in the glass with a shiny brick-red rim to it.  On the nose, it was clearly a mature wine but still wonderfully lively and fresh and with none of the volatile or alcoholic smells that had put me off in the past, just lovely, savoury, dried fruit and fig aromas.  The palate was deliciously soft and harmonious with the same flavours and character I had noted previously and the sensations just went on and on in the mouth – and in the glass over the remainder of the evening.

The grapes for red Musar are a blend of Cabernet Sauvignon with 2 varieties native to the south of France, Cinsault and Carignan, all grown in the hot, dry Bekaa Valley in vineyards almost 1000 m (3000 ft) above sea level.  Fermentation is in cement vats and then the wine spends a year in oak barrels.  The 2001 vintage was finally bottled in summer 2004 but, typical of Musar, not released for sale until some years later when the producers thought it was ‘ready’.

Waitrose Cellars are still showing a stock of the 2001 on their website at £27.99 and more recent Musar vintages are quite widely available, but need time before being at their best.  A wine to enjoy (or not) depending on your view.

* for those readers not familiar with it, Marmite is a tangy, savoury spread