A couple of weeks ago in Bristol Wine Blog I wrote about an oak-aged wine. It seems I didn’t explain the term ‘oak-aged’ or say how can you tell if a wine tastes ‘oaky’?

The words relate to the fact that wine has to be made and stored in some kind of container before it is bottled ready for sale and the material used for that container will have an effect on how the wine tastes. Fermentation and storage tanks will often be made of stainless steel, which is inert, that is it has no flavour of its own.

Wines made and stored in such tanks (pictured above) will taste fresh and clean and fruit flavours are most likely to predominate; typically, we might talk about the wine tasting of citrus or melon or tropical fruits. The same would be true of other neutral containers such as those made from concrete or glass. 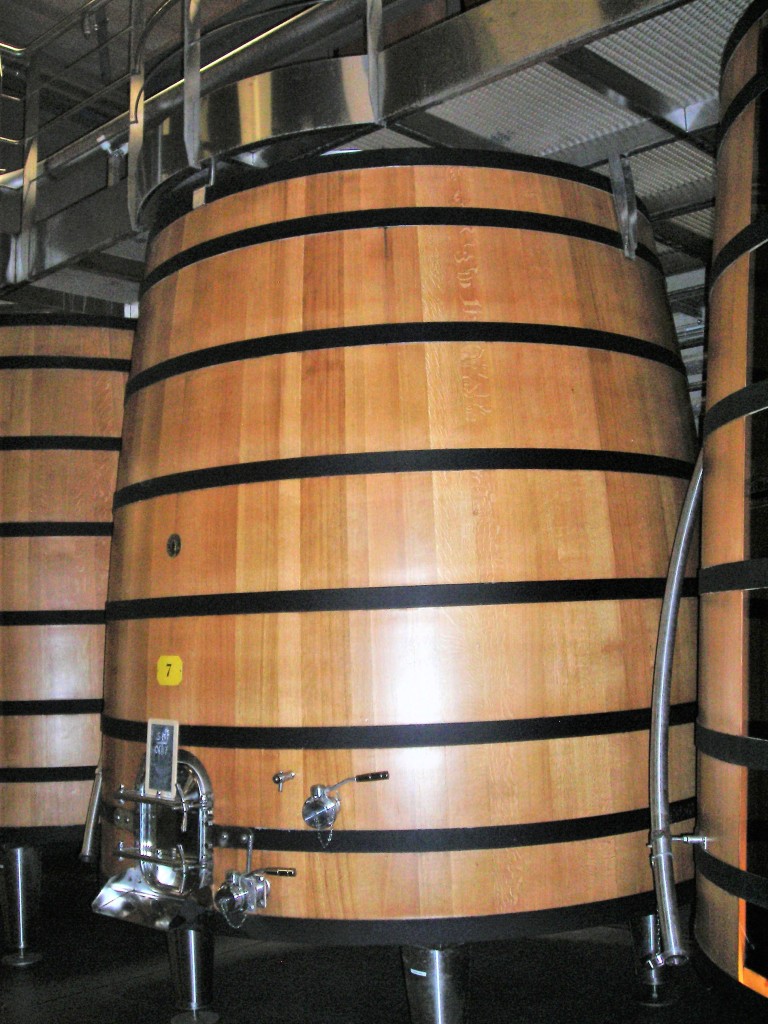 On the other hand, the winemaker might use wooden barrels – large as above or much smaller – (usually made of oak, but other woods like chestnut can sometimes be used) to ferment or store the wine in. Wood is not inert – the grain is very slightly porous; not enough to allow the liquid to seep out, but sufficient to allow tiny amounts of air in. This air softens the wine slightly and changes its character. Also, depending on the age of the barrel, the wood itself may have a flavour which is transmitted into the wine; this is the ‘oaky’ taste I referred to and can include flavours like cinnamon, cloves or other spices, vanilla, toast, cigar boxes or pencil shavings. In all these cases, the flavours of the fruit should still be there but they will no longer be the principal taste.

If you want to sample the difference, I suggest you get 2 bottles of Rioja – 1 labelled Gran Reserva and the other without the words Crianza or Reserva on the label and taste them alongside one another. The Gran Reserva will be the oaky one.

Final question: is an oaked wine better than an unoaked? It all depends on your palate but, for me, there is a place for both.