My wife and I have enjoyed quite a few Mediterranean holidays over the years although none since the Covid virus interrupted all travel (and much else).  But we still love cooking and eating Mediterranean-style food – especially when the weather is warm and sunny.  And the wine to go with our Mediterranean dishes? Well, how often do you find the food of a country or region matches the wines from the same area perfectly?

Of course, when considering Mediterranean wines, you have a vast range to choose from: parts of Spain, the whole of the south of France, much of Italy and Greece and so many others besides.

This time, looking at the dish we were cooking didn’t help to narrow the choice at all; seared tuna steaks with a soy and balsamic glaze would probably have worked with many fuller-bodied whites, a flavoursome dry rosé or even a light and fruity red.  In the end, we settled for Tenuta Flaminio’s rosato (rosé) from Brindisi in Italy’s south-eastern Puglia region.

Made with the local Negroamaro grape variety (which can also contribute to some delicious reds from the same area), this crisp, fresh, dry rosé is full of lovely crushed strawberry flavours with some attractive smoky hints.  It teamed beautifully with the tuna although it was so good as an aperitif that there wasn’t too much left to enjoy with the food.  Best lightly chilled – not too cold; about a half hour in the fridge is all that it needs.  A real bargain at £8.95 from The Wine Society.

Rosés are widely produced throughout the Mediterranean and are often thought of as just wines for summer.  But, although they obviously do work well at this time of year, many of the drier examples – and this is important – are very food-friendly and are worth considering to match fish, chicken or just about any Mediterranean dish throughout the year.

It’s become popular in the media these days to talk about a ‘North/South divide’ in England, contrasting the poorer north with the richer south.  It’s an interesting idea with some truth in it, although it’s not really as simple as that.

But I have a contrast of my own to put forward: in wine terms, the east/west split in Europe – between the unfashionable east (Germany, Hungary, Greece and the Baltic countries) as opposed to the fashionable west (principally France and Spain) with Italy lying somewhere in the middle.

For those willing to explore, there are some real delights to be found among the unfashionable – and, because the wines are generally less well-known, a few bargains, too.

Take the delightful St Donat Tihany Rosé from Hungary, for example (Novel Wines, £11.49).  The pretty pale pink shade suggests a subtle, even neutral flavoured wine, but the colour is deceptive in that there is plenty of character in this delicious, dry rosé, a blend of Syrah, Merlot and the local speciality, Kekfrankos.

Grown in the Lake Balaton area in the west of Hungary, the vines benefit from 2 natural features: the influence of the lake moderating the climate and the low-fertility volcanic soil which limits the grape yield and so intensifies the flavours. The wine is completely unoaked to preserve its fruity character but then spends six months on its lees for extra texture and flavour.

The result is fresh and lively, full of red fruit flavours, particularly crushed strawberries, crisp, but with enough body to make it surprisingly food-friendly – a garlicky fish stew with tomatoes springs to mind.

Finally, a word about Novel Wines, from whom I bought this wine.  They are a relatively young (started in 2016) Bath-based company who specialise in wines from smaller producers mainly from across central and eastern Europe (especially Hungary), but also have an interesting selection of English wines. If you are interested in exploring the unusual, you can find them at www.novelwines.co.uk and they will deliver.

Congratulations if you looked at the title and still decided to read the blog!  Particularly if, like me, you were old enough to drink wine in the 1970s.  Because, in those far off days, the words ‘Portuguese’ and ‘Rosé’ meant just one thing: the most popular wine of the era, Mateus Rosé, sold in that familiar, dumpy shaped bottle that, when empty, made a perfect base for a table lamp.  At its peak, in 1978, it accounted for over 40% of Portugal’s wine exports and sold a cool 42 million bottles in just one year.  That’s a lot of table lamps!

Mateus Rosé is still around (and this year celebrates 75 years since it was first produced) but, as readers of this blog will, no doubt, know, it isn’t the only Portuguese rosé on the market.

With summer in mind, I picked up a bottle of Ciconia Rosé from Corks of Cotham recently (£8.99). 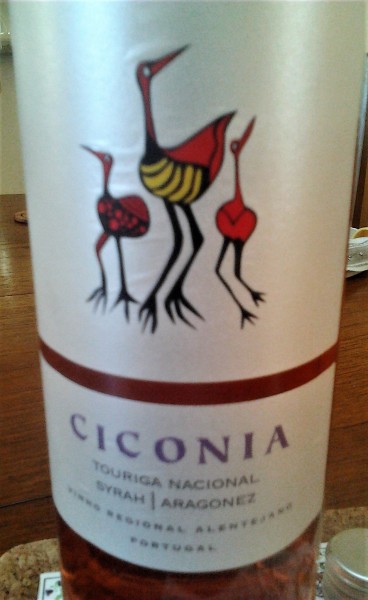 A blend of 3 grape varieties: touriga nacional, one of the main components in port and many high quality Portuguese reds, syrah (shiraz) and aragonez, one of the Portuguese names for Spain’s best red grape, Tempranillo.  These three together made a wine about as different from my memories of Mateus as it is possible to be: slightly off-dry and really refreshing with attractive strawberry fruit and a clean juicy finish.  Great for drinking on its own or, perhaps, even better, with fish in a tomato based sauce (Cod Portuguaise) or a bouillabaisse.

I’m happy to drink rosé at any time of year, although I think it works best with lighter, summery foods.  But the wine must be dry – or off-dry at most; for me, the sweeter rosés such as Mateus and some of the commercial White Zinfandels that are widely available are just too sweet for a main course yet not sweet enough for a pudding.

But they sell, so someone loves them – just leave me with the Ciconia, the other Portuguese rosé.