(picture thanks to Getty Images)

It’s not often that Bristol is mentioned in the national news – even rarer that it’s the top story. But that was what happened recently when teenage climate campaigner Greta Thunberg visited the city to address an audience estimated to be around 20000 people followed by a march around the centre of town.

Her message that we need to look after our planet for the benefit of future generations is compelling but what can wine lovers and those in the wine industry do to support those aims? For the answer, we need to look at the role of the harmful gas, carbon dioxide (CO2) in the production and distribution process.

At the very beginning, there’s a positive effect. Vines, like all woody plants, absorb CO2 from the atmosphere and use it in the photosynthesis process which drives the plant’s growth. Sadly, it’s mainly downhill from then on, particularly once the grapes are harvested and arrive in the winery.

There, fermentation converts the sugar in the ripe grapes into alcohol, but this chemical reaction produces CO2 as a by-product. Fine if you’re making sparkling wine – the CO2 is captured in the bottles to make the fizz; not so good if you want still wine as then the CO2 is simply released into the atmosphere. Anyone who has been in a winery while the winemaking is ongoing will, hopefully, have been warned of this as high levels of CO2 in a confined space can be fatal.

And the negatives don’t stop there: I’ve blogged before about my hatred of over-heavy wine bottles, but there’s no doubt that they need more power to move them to the customer – and what results? More CO2!

So, what can we do (apart from stopping drinking wine, of course, which isn’t really an option for me!)? Encourage producers to use lighter bottles or other packaging materials, perhaps, or even dispense with the insistence that Quality wines have to be bottled at source; shipping to the UK in bulk and bottling here has less impact. Or, most pleasurably of all, drink more of your local sparkling wine.

How do you choose just 10 wines to represent Italy – a country that produces almost ⅕ of the world’s wine each year? That was the problem facing Graeme Ewins of Great Western Wine who hosted a recent meeting of the Bristol Tasting Circle. His solution? Avoid the obvious like Chianti and Barolo and focus on producers who are creating something interesting and distinctive.

That is certainly true of Roberto Anselmi from the Veneto region.

His deliciously rich, medium-sweet I Capitelli (£25 per half bottle) was a bold start to the tasting with its intense flavours of orange, peach and honey from the often bland Garganega grape (think Soave). 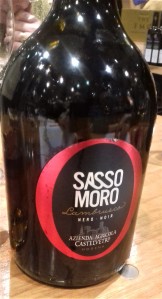 But Sassomoro (£14.95) is quite different with its refreshing bitter cherry and blackberry fruit, this would perfectly cut through any fattiness in a plate of dried or cured meats, which just happen to be a speciality of the region of its production.

My favourite wine of the evening was Antonio Caggiano’s Bechar, 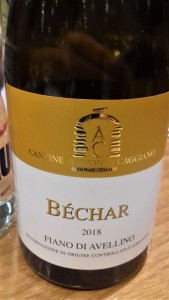 a lovely crisp, fresh, slightly smoky Fiano di Avellino (£18.95) from the hills inland of Naples. Good to drink on its own but even better as a food wine – a creamy risotto springs easily to mind.

Among the reds was an incredible bargain:

Palladino’s Biferno Riserva from the east coast (£9.50) is a blend of Montepulciano and Aglianico giving a wonderfully quaffable wine full of smooth, jammy black fruits. Not greatly complex but oh so drinkable. 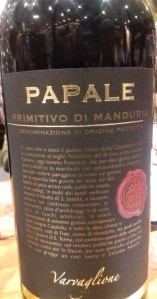 A big mouth-filling wine in every way (14.5% alcohol) but with the blackberry fruit and spicy, smoky oak all in complete harmony. A wine for full-flavoured robust winter dishes – a game casserole, perhaps?

So ended a fascinating trip round the wines of a country full of delicious surprises. Special thanks go to our guide, Graeme, for pointing us towards bottles that, before this evening, many of us would have ignored.

When I was young, there was a hit song by the pop group, The Animals, called ‘Please don’t let me be misunderstood’. Its sentiments spoke to many young men at the time but, subsequently, I’ve thought how well the title could apply to German wine, especially in the UK. “It’s too sweet” and “the labels are too complicated” are just 2 of the more frequent complaints and, as a result most supermarkets and even many wine merchants simply don’t stock it, believing that it will just stick on their shelves.

But, search a little and you can prove many of the common views about German wine wrong – as well as finding some delicious bottles to enjoy.

Take Aldinger’s Fellbacher Alte Reben Trollinger, for example (Wine Society, £16). For a start it’s red! Many would be surprised to know that just over ⅓ of all German wine is red, mainly made with Pinot Noir (or Spätburgunder as its known there), but also Dornfelder, Portugieser and, as in the wine we opened, Trollinger. The grape is a speciality of the Wϋrttemberg region of southern Germany and would make a good alternative to a Cru Beaujolais. It’s a thin-skinned variety so produces quite pale-coloured reds but that in no way reflects the flavour. Our bottle showed all the lovely intensity of a wine made from old vines (alte reben in German) yet is fairly light-bodied, but with attractive bitter cherry fruit and a pleasant spicy bite.

Nothing like the semi-sweet, thin examples that are widely thought of as ‘typical’ of the country’s wines and proof, if any were needed, of how much German wine is misunderstood.

For those local to Bristol who might like to explore further, there are still a few places available on my day course ‘the Wines of Germany, Austria and Hungary’ at the Stoke Lodge Centre on Saturday 7 March. For more details and to book, go to www.bristolcourses.com.

What better way to mark the final evening of the UK’s membership of the European Union than a wine tasting evening organised by the Bristol-Oporto Twinning Association? The Association fosters links and arranges exchange visits between Bristol and Oporto, the Portuguese city from whom Bristol has bought goods, particularly port, for centuries.  And, for this meeting, we also welcomed representatives from two of Bristol’s other Twinning groups, Bordeaux and Hannover.

The event was hosted by Alan, the owner of Clifton Cellars, one of Bristol’s best independent wine merchants, who brought along a selection of wines with bottles and labels concealed and challenged the group to identify the grape or region, country of origin and price of each. ‘Blind’ tastings border on the impossible, even for wine professionals like me, so I approached the evening with some trepidation – fully justified, as it turned out, even with Alan’s helpful hints!

As we discovered when all was revealed, our test began with the smooth, creamy Talmard Macon Chardonnay with its lovely ripe fruit on the palate. By contrast, the 2nd white, a Rioja, Viña Real, showed a decidedly spicy, oaky character. These were followed by a trio of reds which, as Alan suggested, were even more tricky to identify. The first, Ca’ Vittoria Appassimento from Italy, was made from partially dried grapes in the style of an Amarone, but without that wine’s usual heaviness (or sky-high price!) Next, a Portuguese red – inevitable, I suppose, given that this was an Oporto Twinning Association meeting. Vina do Mouro had the fresh, blackcurrant aromas of Cabernet Sauvignon enhancing the flavours of a blend of Portugal’s native grapes.

All too soon we had reached the final wine – a nicely balanced and satisfying Merlot-dominated red Bordeaux, Château Trébiac from the Graves region. And then it was time to add up the scores which showed that 2 members of the group had achieved more than 70% correct. As Alan himself said, the winners’ bottle prizes could not have been more well deserved.

A delicious cheese and paté buffet ended the evening – a chance to chat with friends and to try some of the wines again – obvious, of course, when you can see the labels!

All wines are available from Clifton Cellars and are priced between £12 and £15.