Naming is vital. Get it right, and your product is on everyone’s lips; on the other hand, failing to check what your wonderful name means in other languages can be disastrous. Take the car company Vauxhall, for example. They named a car ‘Nova’; that’s great in English but, in a number of European languages, No va means ‘it doesn’t go’ – hardly the basis for a good marketing strategy!

In wine, too, names have been used to good effect: to my mind, one of the best is the South African producer who mocked Côtes du Rhône and Côtes du Rhône-Villages perfectly with Goats do Roam and Goats do Roam in Villages, although I also like the style of an American grower, annoyed that he wasn’t allowed to use the name ‘port’ for his fortified port-style wine, called it Starboard!

And then there are the attempts to attract buyers with particular interests: some friends of ours, knowing that I love cricket, shared a bottle called ‘Men in White Coats’ with us recently. 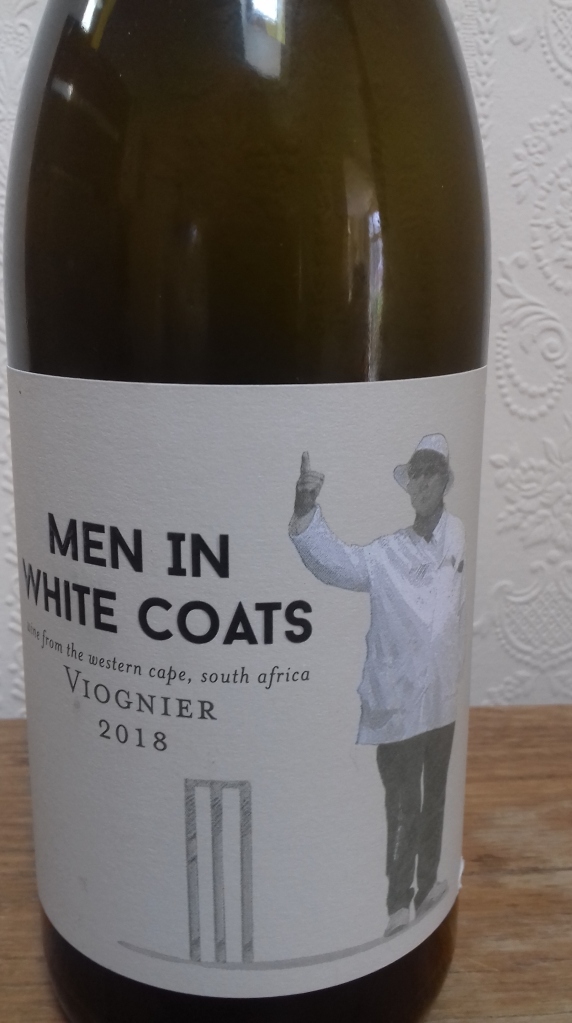 (For non cricket-lovers among you, I should explain that cricket umpires traditionally wear white coats and the raised finger gesture on the label is the umpire’s signal that the batsman is out and his innings is over). The wine itself – a clean, crisp, easy-drinking Viognier from South Africa – was, however, less of a talking point during the evening than the name, which, to all of us, had another, less flattering, meaning.

Back in our youth, when someone was behaving strangely, it was often said that the men in white coats would soon be coming to get that person – the men in question being the nursing staff at a local facility for the mentally ill.

So, did our friends’ bottle really refer to the cricket or were they thinking of the current state of the country here in England?

Bristol Wine Blog is written by Ian Abrahams, a freelance Wine Educator, trading as Wine Talks and Tastings. Ian holds the Wine and Spirit Education Trust (WSET) Diploma, a high level professional qualification, and is a certified tutor for WSET. He runs courses for both professional and amateur wine lovers in and around Bristol including at Stoke Lodge (see the Bristol Adult Learning Service brochure or online at www.bristolcourses.com). You don’t have to be an expert or wine buff to enjoy Ian's courses, so long as you enjoy a glass of wine. Find him also on Facebook.com/winetalksandtastings. View all posts by Bristol Wine Blog